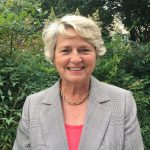 Can you name a technology that has commanded the attention of Wyoming ranchers and Walmart executives alike? How about one with hundreds of millions of dollars being invested in it every week? Attendees at AGree’s latest forum were treated to a fascinating exploration of blockchain technology, part of AGree’s Discussion Series exploring key issues within the food and agriculture system.

Through real-world examples of its use in the food system, the panelists highlighted blockchain’s promise in the food system and beyond. Our panelists illustrated how technology has the potential to not only improve food safety, but also help restore trust in food labels and the food system overall. I’m delighted to share the highlights below. If you unfamiliar with the basic function of the technology, you might want to start with the video we shared at the beginning of the forum.

Blockchain on the Ranch: Wyoming Certified Plus

Bonita Carlson, a rancher who joined us from Persson Ranch in Wyoming, is part of a private blockchain ledger that she described as driving demand. She explained what’s in it for producers, “That is, a more intimate relationship with the end consumer, and I believe the end consumer is awfully excited to have a little more intimate relationship with the producer.”

Bonita said blockchain moves agriculture beyond “country of origin” labeling to “pasture of origin” labeling. Their private blockchain ledger, Beefchain, tracks their calves through an RFID ear tag. She believes blockchain will address producer and consumer frustration with the entry of foreign meats into the U.S. market.

She identified two key benefits of blockchain related to food safety and program accuracy: If there is a recall, blockchain traceability is instantaneous, compared to the days often required currently to find the source of contamination. Secondly, she said current programs, including a USDA tracking program, offer little benefit to the producer. They involve a third party coming to the farm and asking questions, but the content of their records and destination of the information are often a mystery to producers.

She asserted that blockchain puts producers in control of their data. She offered this example: if a calf in a herd being raised without antibiotics gets sick and needs antibiotics, a rancher separates the animal from the herd, treats it to prevent suffering, and instantly scans its tag to note the antibiotic treatment. Every downstream point in the supply chain will then be able to view that record, building trust in the accuracy of final retail label.

Wyoming added the designation “Wyoming Certified Plus” to increase demand and the price paid to producers who participate in the blockchain tracking program. Bonita said interest is very high with daily calls from producers wanting to join the program and from buyers wanting their product, “We are having a hard time keeping up with demand, nationally and internationally.”

Now imagine testing blockchain’s ability to perform not in a single state or country, but on a global scale. That’s exactly what Walmart set out to do in the name of food safety. Panelist Tejas Bhatt, the company’s senior director of food safety innovation, explained, “We looked at the business problem of identifying food safety risks earlier in our supply chain, because typically by the time the food gets to our stores it’s too late to put food safety interventions in place.” This led to the question, “Do we know what our supply chain even looks like?” From there, a two-year journey began. Walmart tested blockchain technology with two dozen commodities on an international scale to determine whether they could identify food safety risks earlier in the supply chain.

Tejas said he’s pleased Walmart chose to invite competitors to use the same blockchain system instead of opting for a proprietary approach, “We’re using an ecosystem approach. We’re building a private blockchain but inviting our competitors like Kroger and Wegmans to join us.” The goal, he said, is to fundamentally change the response to food safety risks throughout the entire food system.

Tejas addressed the question of reliability of information by saying that blockchain is different because the suppliers know that when they enter data, it stays forever. Also, it’s consensus-based, so even Walmart cannot change the data.

It’s common knowledge that the food system faces a consumer trust gap. Tejas sees trust-building potential in blockchain because consumers question large, centralized entities, whether that’s big food, big pharma, or big tech companies. Blockchain enables independent and competing parties to verify data, so it isn’t controlled by a single entity. He talked about the potential to have NGO partners, environmental groups, and standard-setting bodies participate in the system, which builds consumer trust that the data is reliable.

Benefits flow back to suppliers, as well, who gain visibility into where their product goes after it leaves the farm. Tejas acknowledged it would be easy for large companies to collect data from suppliers and mine it, without ever sharing the data or the learnings – as Bonita described. They both believe blockchain provides opportunities for two-way learning and a shared value proposition.

Blockchain technology is being utilized at the farmer co-op level, as well. Panelist Cody Hopkins, CEO of Grassroots Farmers’ Co-Op, said they are using blockchain to track poultry, pork, and beef from farm to fork. He calls it radical transparency to address a “crisis of trust.”

Consumers want more information on labels and full traceability, he said, citing research suggesting only 1 in 3 Americans trusts that the food system is safe. He blames, in part, the many unsubstantiated claims being made on product labels. Consumers often have no way to verify the claims, inviting mistrust.

Cody said Grassroots Farmers’ Co-Op is a small company with a small supply chain but a big commitment to radical transparency. Blockchain helps them document improved production practices on member farms, connect those farmers to markets, and ensure that consumers can easily verify the origin and sustainability of their premium purchases.

Their customers want to know the story behind their products and can use a QR code to see every transaction from farm to retail on a blockchain-powered program with peer-to-peer verification along the supply chain.

He didn’t hesitate when asked if they see a return on the investment. Cody noted that it is difficult to track specifically how much blockchain technology has helped, but their customers are clearly willing to pay for traceability. As a result, he said, the Co-Op pays its farmer members about 70 cents of every dollar, which is more than four times the average that producers receive.

Imagine taking on the responsibility of trying to track everything happening in the blockchain space. Keep in mind, the technology is being explored in the financial sector, as well as energy and environmental sectors. Panelist Dave Rejeski, director of the Technology, Innovation, and the Environment Project at the Environmental Law Institute, is trying to track blockchain activity and said, “There’s hundreds of millions of dollars being invested every week… we literally can’t keep up.”

This rapid innovation churn is both good and bad, he said, because it’s difficult to track all the innovation that is currently occurring in the space. He predicts blockchain will have a big impact on anyone involved in digital transactions, saying, “The ‘internet of things’ needs a ledger that is just as distributed.”

He highlighted three examples to show a diversity of applications. Ripe.io is a blockchain for food that tracks temperature, humidity, and food chemistry. It just received $2.4 million in funding. Beefledger is a product validation system for Australian beef, which uses a “Beef Token” for purchasing. The IBM Food Trust provides a ledger for the transfer of ownership of products and a lot of food system apps are being built on it. Far beyond that, blockchain is being used to trade energy (in kilowatt hours), to bring financial incentives to the 2 billion people with no access to banking services, and to record land tenure in countries with limited titled ownership.

The astounding potential scope of blockchain’s applications is matched by a breathtaking number of unanswered questions and daunting challenges. Each of our panelists acknowledged that blockchain is susceptible to human error and fraud, though the probability may be greatly reduced by the permanency of the record and visibility by others on the system.

Dave described four key challenges. The first is scalability and computational power. He said one blockchain system (Bitcoin) requires the same amount of power that is being consumed by the entire country of Ireland. The larger the system, the more complex it becomes, and the more energy it requires.

The second issue is speed. Access to the Internet is limited in many places and even fewer have broadband globally. Security is the third issue. Because blockchain systems have many layers, he said, they are vulnerable to hacking at the top (through the apps that provide access to the records) or at any layer along the way.

Last, but certainly not least among the challenges, is the question of protocols and regulation. A great dialogue occurred during our forum when a representative of the U.S. Department of Agriculture posed a question to the panelists inviting their opinions about regulatory oversight. Several panelists suggested there is an opportunity for regulatory bodies to become part of blockchain systems, utilizing them to accomplish oversight goals more efficiently.

Many questions remain. Should protocols be established to guide the use of blockchain technology? Should there be interoperability standards? Should the technology be regulated? Should regulators integrate with the systems being established by the private sector?

Within the food system, a key question for many is whether consumers will pay a premium for the traceability blockchain provides. As noted above, several panelists said their success is clear evidence of consumer demand.

I am grateful to our panelists for taking the time to share their insight and experiences. We could have continued the forum all afternoon, I believe, and kept a captivated audience.

If you’re interested in the topic, I’m confident you’d enjoy the entire dialogue. This forum was part of AGree’s Discussion Series exploring key issues within the food and agriculture system.

Listen in on a fascinating exploration of blockchain technology and the unanswered questions about how it can be harnessed to improve our food systems.